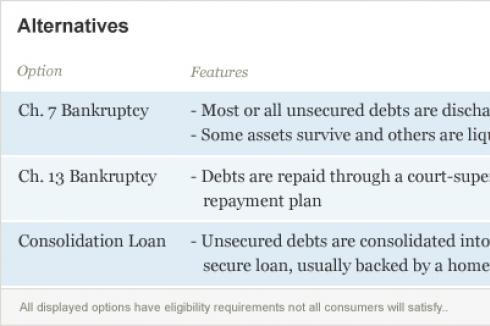 Options for those with overwhelming debt

Although debt settlement and credit counseling have been the focus of this article, it is important to note that consumers who struggle with unmanageable debt have other options to improve their financial prospects. The first, and probably the most obvious, solution is bankruptcy. U.S. federal law provides for two basic types of consumer bankruptcy: Chapter 7 and Chapter 13.

A successful Chapter 7 case absolves the debtor of the obligation to repay most or all of their unsecured debts, such as credit cards, medical bills, and payday loans. Chapter 7 is probably the most straightforward and least expensive form of debt relief, while a Chapter 13 allows a debtor to establish a court-supervised repayment plan of up to five years to pay back part or all of their debts.

Unfortunately, bankruptcy has several serious downsides, which make it the option of last resort for many consumers. First, both Chapter 7 and Chapter 13 seriously damage the filer’s credit rating, which can make obtaining loans, renting an apartment, and even finding a job more difficult. And this damage may last for up to ten years, much longer than what is typically seen for consumers with other derogatory credit marks. Second, a bankruptcy filing, unlike a debt settlement or credit counseling program, is a public court record, which means that anyone who is interested can find out who has filed bankruptcy, what they owed, and to whom it was owed. Finally, a 2005 amendment to the federal bankruptcy code implemented restrictions on who qualifies to file Chapter 7 bankruptcy, forcing many filers into lengthy, expensive Chapter 13 plans. This law also added several new filing requirements that have made filing for bankruptcy a more difficult and more costly process.

A debt consolidation loan is another option for struggling consumers to consider. However, this alternative is available only to those consumers who own a home and have substantial equity in their property — a segment of the population which has shrunken significantly during the current economic downturn and crash in home prices.

Consolidation loans work for some individuals, but consumers must be cautious in choosing this option, as they will be converting unsecured debt, which is dischargeable in bankruptcy, and can be included in settlement and credit counseling programs, into debt that is secured by a lien on their home or other property. If a consumer who has taken out a consolidation loan cannot afford the payments, he or she will be facing the possible foreclosure of their home, rather than a drop in credit score and collection calls as would have occurred had they failed to pay their credit cards.