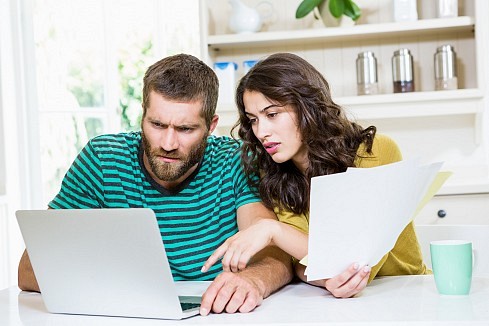 Household Debt is Growing. So is Serious Delinquency

Are you worried about your current debt level? Do you have a mortgage, credit card debt, auto loan, or student loans? If so, you are not alone.

According to the NY Federal Reserve Household Debt and Credit Report for Q3 2018, there is a higher level of delinquency among non-housing debt, especially auto loans, and credit card debt. Student loan debt remains at high delinquency rates. The group that is struggling most is the 20-29 year group, as the serious delinquency levels are close to twice the national level.

Debt levels at the beginning of 2018 were at high levels, with total US Household Debt at $13.15 trillion. However, the debt train is still rolling. According to the most recent NY Federal Reserve’s 2018 Q3 Household Report, "total debt balances reached $13.51 trillion, a level more than 20 percent above the trough reached in 2013."

Mortgage balances rose to $9.56 trillion, with the following breakdown:

"Mortgage balances, shown on consumer credit reports on September 30 stood at $9.1 trillion, an increase of $141 billion from the second quarter of 2018. Balances on home equity lines of credit (HELOC), on a declining trend since 2009, decreased by $10 billion in the third quarter and are now at $422 billion, the lowest level seen in 14 years."

Total non-housing debt continued to rise and reached $3.95 trillion. They note that

Consistent with other data, the NY Federal Reserve reports that “the median credit score among newly originating mortgage borrowers was 758... For auto loan originators, the distribution was flat, and individuals with subprime scores received a substantial share of newly originated auto loans.”

The NY Federal Reserve published data about debt for different age groups. Currently, the 40-49 age group holds on to the most significant amount of debt, followed by the 50-59 age group. Both the younger age group (18-29) and the eldest group (70+) have about $1 trillion debt levels. 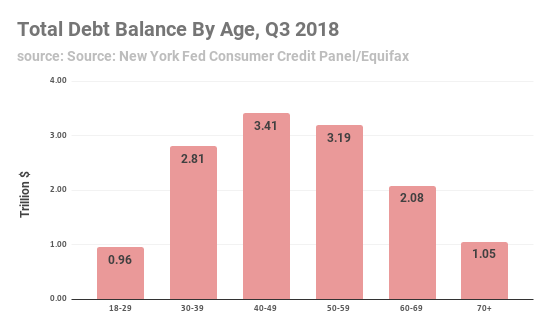 Debt level shares have changed over the last ten years.  Check out the following link to see Q3 debt levels by age for the previous ten years. Two striking trends are that the 70+ group increased their share from 4% to 8%. On the other hand, the 40-49 group dropped from 30% to 25%.

Looking for a loan? Get a Quote

Are you looking for a mortgage or personal loan?

If you are having difficulty repaying your debt, then you are not alone. According to the Q3 2018 data, the overall amount of delinquent debt 90+ or more for the US was 3.1%. California, which has a more significant amount of mortgage debt was much lower, at 1.9%, whereas Florida had a much higher rate, 4.7%.

Delinquency rates varied both by loan type and by age factors. Mortgage loans serious delinquency rates are quite low, at about 1.1%. The main reason for this is that since 2008 lenders have tight underwriting criteria. On the other hand, auto loan origination has grown in the last few years, including sub-prime lending. The latest data shows that transition rates (“The transition rate is the new (seriously) delinquent balance, expressed as a percent of the previous quarter’s balance that was not (seriously) delinquent,”) for all auto loans was 2.3%, but the younger age group had a much higher percentage, as 4.18% of loans moved into serious delinquency.

Are you planning on taking on more debt? Perhaps you are thinking of buying a home and taking out a mortgage? Or maybe considering your refinancing your home? Do you want more affordable monthly payments (stretch out your mortgage), or build up your equity (shorter term loan)? Or maybe, you need extra cash to do home renovations or consolidate debt.

To effectively deal with debt start by checking your budget and overall financial situation. Then research your options. If you are looking for a new loan, then shop and compare.

Are you looking for ways to get out of debt? Check out Bills.com Debt Navigator to find a personalized debt relief solution.