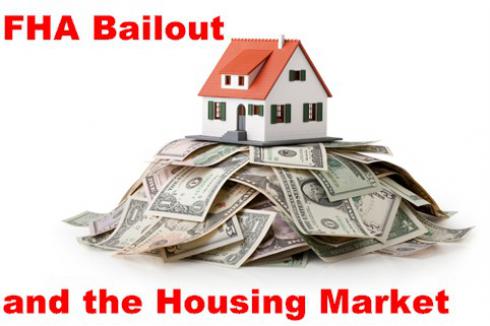 1 Comments
IN THIS ARTICLE:

The 2012 elections are over and President Obama has another four years to implement his agenda. There are certainly a large number of issues on his plate, but one on-going issue that is warming up is the question: Is there a need for a treasury bailout of the Federal Housing Authority (FHA) and will this affect the housing recovery?

The housing market and its potential recovery depend on a lot of factors, including the price of money, jobs and income security, foreclosure rates, and other macro-economic factors.

The availability of FHA loans is an important factor in the mortgage market. If the Treasury needs to bail out the FHA, then these may some of the consequences:

The FHA Role in the Housing and Mortgage Market

The FHA is a major player in the housing and mortgage market. The FHA guarantees both purchase and refinance mortgage loans. According to a recent HUD report, FHA purchase loans market share for the first 7 months of 2012 was over 15% for households and over 11% for the dollar volume.

The mortgage market has changed since the housing crash of 2007-2008. Private lending money has become scarce. With the scarcity of private money (and private Mortgage Backed Security), the dominance of Conventional loans (Freddie Mac and Fannie Mae), and virtual disappearance of the the sub-prime market, the FHA plays an important role in the housing market.

Record low interest rates (in part due to the Federal Reserves massive purchase of mortgage bonds) have fueled the refinance market. The housing market shows early signs of a recovery in September and October of 2012. That makes the FHA money all the more important. However, due to a rise in delinquent loans and the huge increase in claims for bad loans (many originated during the heydays of 2005-2008), the FHA is facing huge deficits and may need help in the form of a treasury backed FHA bailout.

The HUD published information in November 2011 showing that its capital ratio was only 0.24%, way below the required statutory level of 2%. It looks like the situation has deteriorated. According to an article written by Edward Pinto, a leading expert in the mortgage industry, “one in six FHA loans continued to be delinquent in July (2012)”. He goes on to note that the capital ratio is at all time low, and declining past earlier low time records.

Quick tip
#1: looking for a fha or conventional mortgage? get a mortgage quote from a bills.com mortgage provider.

FHA Bailout and Housing Recover: Should You care?

You should definitely care about a potential FHA bailout. The housing recovery will greatly depend on the availability of mortgage money. If FHA loans become either more expensive or less available, we can expect an increase in the price of the mortgage loans. This will obviously damper the housing recovery.

As noted, the FHA is important, and here are a few reasons you need to be concerned:

Nobody knows for sure when mortgage rates will go up, or when the housing market will recover. However, by following the latest news, and preparing yourself for a home purchase and mortgage, you can ensure yourself the best terms available.

Quick tip
#2: when you are ready to shop for a mortgage, then get a mortgage quote from a bills.com mortgage provider.