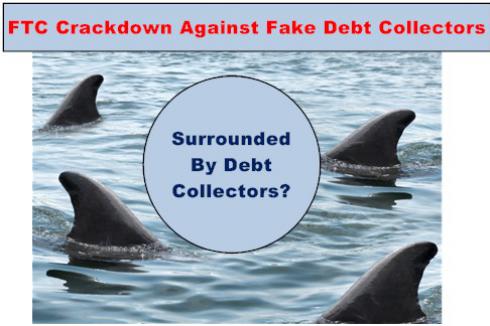 The case against a California based resident, who worked with fake debt collector callers from India, is just another case of the FTC crackdown against scams that targeted financially distressed consumers.

The FTC released a press release on October 2012 about a crackdown on fake debt collectors. The latest scam involved a group of people who used information about consumers who had either taken a payday loan or shown an interest in taking out a payday loan.

The FTC noted that, in this latest case, consumers received millions of collection calls that originated in India. The fake debt collectors raked in more than $5 million over a two-year period. The FTC and state attorneys received more than 4,000 complaints.

According to a FTC press release, the fake debt collectors used different tactics, including:

All of those tactics are illegal. They are also common tactics used by fake or dishonest debt collectors.

Tip
To learn about your consumer rights and debt collectors obligations, read the Bills.com article about The Fair Debt Collection Practices Act (FDCPA).

It is not coincidental that the latest scam involved consumer who looked into payday loans. Scammers seek out the most vulnerable consumers. Payday loans are a sign that a consumer is having a tough time making ends meet.

Many consumers have mounting debt and have trouble making their monthly payments. Stopgap measures, such as payday loans, do not solve financial problems. Usually payday loans are like adding fuel to the fire, and make matters worse. Instead of solving financial problems, they add more debt then needs to be paid off immediately.

Quick Tip #1
If you are having debt problems and looking for a solution that fits your financial situation, then check out Bills.com innovative tool, the Debt Coach.

If your are late in your payments, debt has been charged-off, or you are facing possible legal action, then dealing with debt involves a two-fold approach:

The latest FTC crackdown is a reminder to us that there are debt scammers and unscrupulous debt collectors. It is important that you learn your rights and verify your debts.

Debt collectors do have the right to collect legitimate debts. They can contact you, send letters, and make calls. However, they must ask fairly and within the limits of the law. Anytime that a debt collector threatens you or harasses you, demand that they cease communication with you, and file a complaint with the FTC.

Whenever you are over your head with debt or legal problems, seek professional advice.

Quick Tip #2
Do you have debt problems? Get a free consultation from a Bills.com debt relief provider.
Get Debt Help
Choose your debt amount
Get Started